Sheep in the canal

What a strange day.
Still iced in and not moving anywhere. The ice is getting thicker and it has been snowing most of the day. Just like any spring day really.
The day started normal enough, we got up at first light. Well we got up when I put the light on if that counts. Light snow – nothing too worrying. Had breakfast then Pam took Millie for a walk, all perfectly normal. Then Pam came back, saying that a sheep had fallen through the ice just outside the boat on the off side.
Well, what do you do? I don’t know how to get access to the fields the other side of the canal and if I did, I doubt that I would have much idea when I got there. Now perhaps my education is sadly lacking, but I can’t remember the bit about getting large ewes out of a frozen canal. Perhaps I was not concentrating that day.
Who do you call? What do you do?
Pam went to all the local farms and houses, all no reply. By this time the ewe had been in the ice for half an hour.
OK time to do something. Should I call BW or the RSPCA?


I decided to call the RSPCA. They took the matter very seriously and had an inspector with us within half an hour. That still meant that the poor ewe had been in ice water for an hour. It can’t last much longer. By the time he had arrived we had sorted a route to the other bank and we were at the spot. We had several attempts at pulling the Ewe out. They are very heavy when the fleece is soaked. After a few attempts it was clear that she was trapped. I let the RSPCA man put his arm into the water and free the leg. He did mumble something about the water being cold, I was not surprised, and it usually is when there is 4 inches of ice on it.
﻿﻿﻿﻿ ﻿﻿﻿﻿
We then managed to pull the ewe out and on to the bank. She was alive but only just, very little movement and only just conscious. Between us, we dried her off with old towels covered her with a tin foil blanket. (She looked “Oven Ready in her tin foil blanket) and then in a duvet. After about half an hour she showed signs of improvement. The RSPCA tried to locate the owner via the DEFRA help line. That did not work. (Wrong number given)
A passer by said she would contact the local farmer who would know who owns the sheep. Eventual a farmer arrived, after looking at the soggy and cold ewe, he said he would go back and fetch his quad bike and that her back to the barn to warm up. 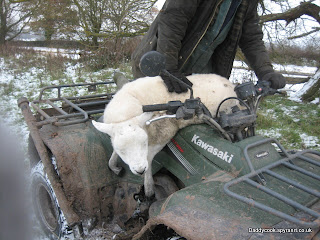 By now it was 2.30; I had been out in the snow for several hours and was getting quite cold. Funny stuff is snow, it looks nice but for some reason it makes you cold!
I do hope that after the efforts of the RSPCA the local farmer and ourselves that the Ewe lives happily ever after. If not can I have for our barbeque?
Posted by Daddy Cook

Yes, Sheep are very heavy when wet, well done with the rescue, I rescued one but it was a bit warming in September.
http://travellinginnodirection.blogspot.com/2010/09/me-ewe-baa.html