We were up and on the move early this morning we were on our way by 8.00. This was not through any great desire to get moving, it was because we were moored next to a Tarmac quarry and they were more than a bit noisy this morning. That together with the weather forecast saying that the weather would turn to rain later was enough to prise me out of bed. When we set off, the sun was shining and all was well with the Earth. I soon found out that when the sun went in, it was bloody cold, and the sun went in rather too frequently. After the first half hour we hardly saw the sun at all and at one point it started to rain.

The journey to Coventry basin was uneventful. We did meet up with a lot of oncoming traffic as far as Sutton Stop, but only one after that. On arrival at the basin we pumped out using our BW Card. It only took about 3 minutes. Much quicker than out electric pump! There is only one other boat in the basin and he assures us that it is very quiet and peaceful here. I do hope he is right. As a precaution, Pam has made me cover the Samy-Sola panel and remove the water jug from the roof. Neither of us are over keen on city centres, so lets just hope that this one is better than some of the others. I do not expect to remain here long! 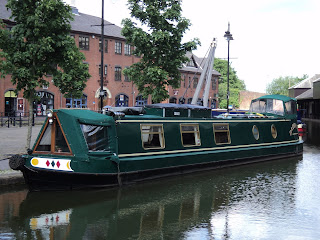