Probably the wettest drought ever recorded!

They all speak like my old mate Mike R. round here. Its a good job I have a Lancastrian following us as an interpreter.

We decided to move to the mine museum to see what is there. We then found that the museum is not open on Wednesdays so we will wait here a bit longer than I expected. It’s not a bad looking spot, it’s not raining and there is a pub opposite. We arranged for some replacement specs to be posted to the pub. Hopefully, they will arrive very soon and we can move on, if not we will have to wait here until they do turn up. I know it’s out of character but we went to the pub for an evening meal. For sweet, I had a lemon meringue it was not only very nice indeed but it was huge! I didn’t want it all but I made sure that I eat it all. For some reason I felt over full and most uncomfortable for the rest of the night. I can’t think why.

Thursday, 10 May 2012 Astley Green Pit Museum
We went to the Pit Museum in the afternoon. On route we called into the pub to see if my glasses had arrived. They had been delivered but no one there opened the door so they have now gone back to the local post sorting office. It was a good idea that went wrong. We went on to the museum. It was very interesting, I was blown away by the winding engine. I have never seen an engine of this size before; it is huge. A real monster. I want one so much. As one walks round the grounds it almost gives the impression of being in a scrap yard. There must be 20 locos of all shapes and sizes, loads of track just piled up. There are various steam engines and pumps, some restored some quietly rusting away. It is a place that would be a top rate attraction if only it could raise the money it so needs.
After all that exercise, I managed to fall asleep on the settee on our return.

First thing in the morning bussed into Tyldesley to collect the glasses from the sorting office. the sorting office was not very far and collected the glasses. We then had to find where and when the buss departs from. We eventually found the spot and had to wait another ½ hour. It was the same driver. We were back on board at 11.30 not as bad as I expected. We soon set sail. The wind was very strong and blowing directly at us. This made it very cold. Not just cold for May but cold for winter! We continued to Scotsman’s Flash. A nice spot with good views over a large flash. The wind must have been close to gale force at times. There are proper waves on the flash, it looks more like the sea than a small shallow lake. 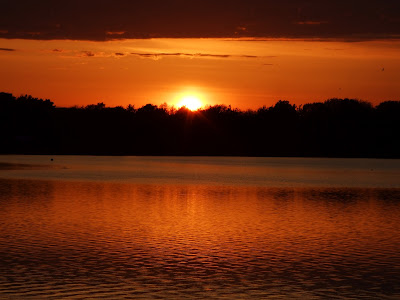 Sunset over Scotsmans Flash - Not bad is it.
Posted by Daddy Cook