Sunday, 08 April 2012 Audlem
When we woke up, the boat had a fair old list to starboard. I put my foot on the floor – It was dry so we had not sunk in the night! Some one had not shut the paddles properly on the lock and the pound had gone down a over night. It soon recovered when boats started using the locks again We then went to the Craft shop and had a good look round. We did not buy much, only odds & sods.

Monday, 09 April 2012 Audlem
Easter Monday, Bank Holiday and pouring with rain! Now there’s a surprise! The path outside the boat has become very muddy and down right unpleasant so we moved over to the tow path side of the canal. We have had short trips before, but this must be the shortest so far! We went for a meal in the Shroppie Fly. Once again the food was first class.

Tuesday, 10 April 2012 Boat Movement
Start Location Audlem Village
Finish location Coole Visitor Moorings
Miles 2   Locks 3
The weather is a lot better this morning, part cloudy with sunshine. It looks like it could rain at any time but nothing like yesterday when it did not stop raining at all. Only a short run today. We were heading for Hack Green Secret Nuclear Bunker.
This must be the worst kept secret in the history of the cold war. Not only is it on every map but it sign posted for miles by road and even signed from the canal. As it is only written in English and not Russian that would have completely confused them!
We have passed this attraction several times and never stopped The temperature dropped after we stopped and I had to light the fire. BW must have known we were coming as they sent a team of men to cut the grass for us- bless them, they splattered the side of the boat with grass cuttings. Pam cut my hair before I had a shower. It was a most unusual style. I felt the clippers going up the back of my head and then heard a scream, followed by hysterical laughter and copious amounts of “I’m sorry” She informed me that she had totally forgot to fit the No 4 guide to the clipper and has mowed a two inch stripe up the back . Completely bald, no hair at all. It was a bit of a shock when I saw it, but on the positive, it will grow out in the next six months or so. Looks like I will have to get used to wearing a hat for a while. 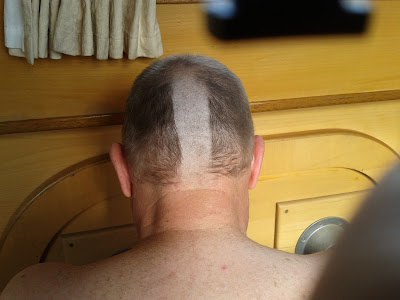 Wednesday, 11 April 2012
This is really nice spot. I could spend a long time here quite happily. The weather is very Aprilish, Bright sun and black clouds with wind one minute and dead calm the next. It just does not know what it wants to do. My hair did not improve at all over night! We walked to the Hack Green Secret bunker. It was an eye opener for sure. A very good and informative visit. I was very surprised on just how small the atomic bombs are! I am just so glad that it was never used for its intended purpose.

It rained most of the night, much of it very heavy. It did not make my hair grow though.
We spent much of the day cleaning and tidying up. We sorted out the front cratch and top boxes. We are slowly getting in to summer mode. Pity the weather is doing the same.

Friday, 13 April 2012     Boat movement
Start Location                Coole Visitor Moorings
Finish location               Cholmondeston Lock Middlewich branch
Miles 9                          Locks 2
Time to move on today, all be it rather reluctantly. This is indeed a very good mooring and I could easily be tempted to stay longer but it is only a short term mooring ie 48hrs and we have exceeded that. Still it is a good day for travelling with sunshine. Still not very warm. There was a significant amount of canal traffic. It is the Friday of Easter week, many hire fleets are going back today. Having said that it was not so busy that it spoiled anything. The weather just got better as the day progressed. A truly nice spring day. We saw several young chicks on the canal. We carried on north along the Shroppie until we came to the junction with the Middlewich Branch. I made the turn very professionally. The boat following made a complete pigs ear of it! We continued along the Middlewich Branch. The first mile or so is lined with moored boats on both sides of the canal. It is much like the Shroppie in so much as it is very rural and edged with concrete and a shelf just below the waterline. We moored up at some visitor moorings, just before the first lock. We will sit out the weekend here and go on to Middlewich on Monday.
Posted by Daddy Cook