Probably the wettest drought ever recorded!


We spent a week on the River Weaver. I think we came off and up the Anderton Lift just in time. The river is now flowing very fast indeed and I am not at all sure that the boat would be able to motor against the flow. The River is a particularly nice place. So quiet and tranquil. The boat lift is just a sunning piece of engineering.
A must see must do place.

It was another very wet and blustery night outside. Thunder and lighting and strong winds. It must be getting closer to summer now. The forecast is for Sunshine & Showers. Russ came just in time for the 10.45 lift. The Anderton lift was very interesting design, architecture and engineering, and smooth in operation. Snowbaby shared the lift with us and we travelled North along the river Weaver together for some time. We turned round just before the split in navigation and returned through the lock to Acton Bridge where we moored up for the night and found a pub. The river is very nice and rural once you leave the lift. This area is dominated by the huge ICI works. It was cold all day and very windy at times. However the threatened rain storms never quite arrived although it looked certain that they would. We moored up at Acton Swing Bridge for the night. We went the local pub The Leigh Arms for meal. The food and service was rather good. I little more expensive than some but better than most. 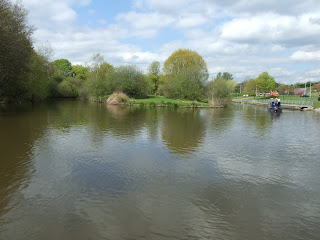 It rained much of the night but had cleared by the time we woke up. The weather was far from perfect. We still had isolated rain showers but yesterdays ice cold wind had largely gone. I phoned lock and it was ready for when we arrived. I do like this bit of river cruising! We carried on past Anderton Boat Lift and on to Northwich. The river is very nice for most of this length. There is the huge ICI chemical works at Anderton other than that, it is just beautiful. If the ICI works had not been there, then I doubt that the boat lift would be either. We moored at Northwich and had a walk into the town. It was much larger than I thought it would be. There were more shops open today (Sunday) than there was in Middlewich mid week. Not a bad town at all. We had lunch on board and then set off once again for Anderton to take Russ back to his car. We all then went for a walk round the visitor centre and had a look at the displays and information boards. All very interesting stuff. Russ then drove home and we returned to the boat. Once we moored up the weather cleared up. Typical!

Monday, 23 April 2012:
Another dull day with drizzle. This must be the wettest drought ever reordered! The boat was cool first thing, I put the central heating on – End of April and central heating on! That can not be right. We had planed to move on up river this morning. The rain showers stopped us doing that. We decided to wait until after lunch but the weather did not improve so we abandoned the move altogether. We had to light the fire it was so cold on board.

Tuesday, 24 April 2012: Miles 10: Locks 2:
A much brighter start to the day than of late, still cloudy but not as heavy as it has been. We had a slow and lazy cruise up stream. The River is very nice indeed. The occasional salt works and factory only help to reinforce the industrial history and the very reason for the navigation. We continued to the end of the navigation and turned in the top flash. A magnificent widening of the river. The only worry is that the flashes are notoriously shallow. We moored up and Pam went shopping. When they returned we set off looking for an overnight mooring. We stopped at the Vale Royal Visitor Moorings. They are very nice indeed with a widening of the river and a large pool the other side.

Wednesday, 25 April 2012 : Miles 9: Locks 3
The weather is horrid! Driving rain, wind and load of cold. A perfect day for staying put in front of a roaring fire and we are in a perfect location for doing just that. But move we must, we have to go to Acton Swing bridge to meet up with Jim & Joan first thing in the morning. We would have set off early this morning in an attempt to beat the weather. It is forecast to start bad and get much worse as the day progresses. We can not do that as this is BW and we have manned locks and they do not open until 10.00. God bless BW! We set off in driving rain. By the time we were at the first lock it had slowed down to just a raging torrent. It never really stopped. It was not only wet but it was very cold as well. By the time we arrived at Acton Swing Bridge we were both starting to feel the cold. As soon as we stopped we had the fire roaring and a warming bowl of soup. We went to the Leigh arms again for an evening meal. (Well you just have to don’t you) I had veggie fish & chips, it was very nice indeed. Battered cheese, how many calories was that? Just to make sure I has a toffee lumpy bumpy with ice-cream. I am determined to beat this anorexia!!

Thursday, 26 April 2012: Miles 9: Locks 3
Another dull & wet start to the day. I don’t like this sort of drought at all! Jim & Joan eventually joined us after first going to the wrong location. We soon set sail, The weather was wet of course. We continued as far as Northwich and had a pub lunch (how out of character). We then carried on through the locks and moored up at the visitor moorings again. The rain never really stopped at all, it just varied from heavy to torrential again. Yes it was very wet, but much warmer than yesterday, but still just bloody lovely. 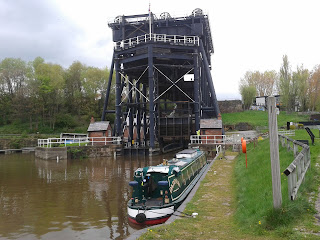 \The weather was a bit better than yesterday in so much as the rain was a lot lighter but it was much colder. We set off to the end of the navigation at the flashes. The first obstacle was the very low bridge. Last time we had about 3 inches to spare. This time the river is running much faster and therefore higher. I approached the bridge very slowly indeed and there was just about 1” of spare headroom. I hopped that the river did not go up much while we were up stream of the low bridge. We made it down to the flashes without any real problems. We made our turn and set off down stream again. This time, as we approached the low bridge we had about 3mph of flow pushing us towards the bridge. I slowed the boat as best I could and we did slip underneath. I am sure that if we left it much longer then we would have been stuck there until the river slowed down. We continued on to Town Bridge at Northwich. Here the River Deal joins the Weaver and it was causing major eddies and whirl pools. I could not hit the junction very fast as we were also approaching a low bridge. The current turned the boat almost sideways before a gained control again. It was all just a bit too exiting for me. We continued on to the Anderton Lift. We decide that we would go up the lift today as the weather was about as dry as it has been all week. We went up without any problems apart from me broke my stern rope as we entered. We then travelled on to a mooring just past the Boat lift. We went to the pub for a very good and well deserved meal. It would have been rude not to call in. 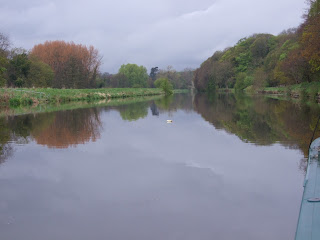 A very low bridge on the Weaver!! 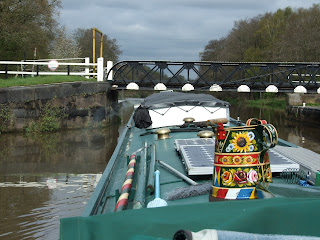