First of all, I would like to apologise for the lack of internet coverage in the Cookley- Wolverley area on the Staffs & Worcs Canal. It would appear that Vodafone do not think that it exists!
Tuesday, 27 September 2011Wolverley to Stourport
A leisurely cruise, the plan was to stop off at Kidderminster to do a bit of shopping then on to Stourport. Once clear of Wolverley lock I caught a jumper on prop. This needed the weed hatch removing and pulling off with my hands. We had arrived at the next lock, Wolverley Court, this time it was more serious. I had the remains of a tow rope wrapped round the prop. Not just a nylon rope but the steel hook and wire rope. This was a complete bugger to get off. I was in the lock for some time before I managed to get it all clear. No other issues. The autumn colors were superb in the sunshine.

Pam then found out that Diglas River Lock is closed after 10.00 for a week! We are too late to travel any distance now as the first lock is only yards away and it is closed!

So it looks like an early start in the morning. We need to be at the first lock for 7.30. That will be a shock to the system.

Wednesday, 28 September 2011 Stourport to Gloucester
An early start, we were up at 6.30 and on our way by 7.30. There was a lot of fog over the river. We sailed towards the first lock. We had to be there before 8 to make sure that we were the first through the lock it we to have chance of making Diglas Lock before it closes for a week at 10.00. Once through we went at full speed to the next lock. Pam phoned each lock informing them of our plight. I have never driven the engine so hard. Each lock was waiting for us with its gates open. We made Diglis Lock at 10.05 15 minutes later than I would have liked. Luckily, the lock keeper knew of our journey and held the lock for us. As soon as we had cleared the lock he closed down for a week.

After the dash to the lock we slowed down to our normal pace ie 1200 RPM it sounded so quite after the noise of full power. We had decided to go to Upton upon Severn. When we arrived it was only 12.30 so we went on a bit further. Perhaps Tewkesbury? At Hampton Load Lock we were informed that there is an unusual high tide and the remaining river will be tidal. He strongly recommended that we continue on to Gloucester. You would be foolish to ignore that sort of advice, so off we go aiming for Gloucester lock. A quick mental calculation soon pointed out that we would once again have to get a move on to make the lock before it closes. Not as bad as this morning, the rest of the river run was completed a 2000RPM. We arrived at Gloucester Lock with just ½ hour to spare. Once through the lock we found the first mooring available. A long day with 41 miles and 4 locks! That’s far more covered than we have ever done before. Time off tomorrow! 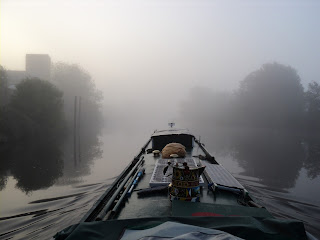 The sun soon came out to greet us! 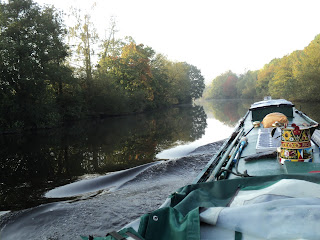